Women Gardeners and the Remembrance of War

As many of you know, I have been writing about the women in wartime for some 20 years now, in both fiction and non-fiction.  In my newsletters I have written about the way in which women did more than simply keep the home fires burning – for example, during WW1 a letter posted in Britain to a soldier entrenched in France could reach him within a couple of days, not only due to the swift processing of mail in Britain, but in France.  A forces post office set up in Le Havre at war’s outset had extended to encompass some five acres by war’s end – and was almost entirely “manned” by women. Men were too valuable as more and more became cannon-fodder. 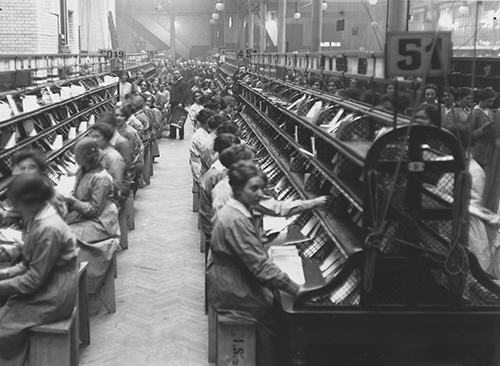 During my early visits to the former battlefields of WW1 in France and Belgium, I learned more about the battlefield cemeteries – the different types of cemetery, how they came to be, and how they were looked after, along with the maintenance that continues to this day.  They are pristine. 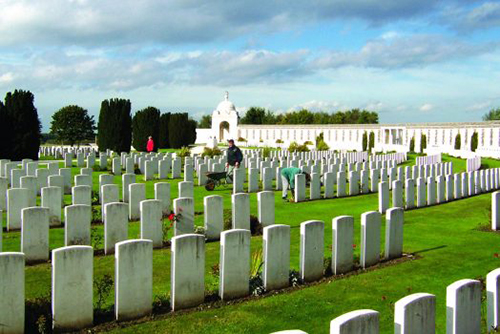 The War Graves Commission (later the Commonwealth Graves Commission – CGC) was founded in 1917, and soon after the founder, Fabian Ware, held a meeting with Arthur Hill, the Assistant Director of Kew Gardens to discuss the possibility of recruiting women to work on the military cemeteries in France.  Hill had his reservations – would the work be too challenging for women, as horticulture can be a hard and isolating occupation.  However, he discussed the matter with Helen Gwynne-Vaughan, a botanist who was also in charge of the Women’s Army Auxiliary Corps (WAAC) in France, which later became the Queen Mary’s Army Auxiliary Corp (QMAAC), though later went back to being the WAAC. Phew – just getting the affiliations right is tricky!  The WAAC had been set up in 1917 following War Office recommendations that women could assume necessary non-combatant roles in the British Army – again to release more men into front line fighting.

Following a general agreement that women with horticultural experience could be recruited for work in the military cemeteries, the Department of National Service set about the task of recruiting twenty women gardeners who would be enlisted into the WAAC and posted to France to maintain graves of the fallen.  Digging graves was one of the tasks assigned to the women.  According to one gardener, Nora Barker, each afternoon runners would come from the various hospitals with a list of how many burials needed to be prepared.  “It was hard work,” said Nora.  “The soil was only two feet deep, but the rest was pure chalk.”  I remember the chalk from my visits to the battlefields. Although over 100 years has now passed since the Armistice, you can trace the location of trenches due to white scars across the land, scars that time cannot erase. 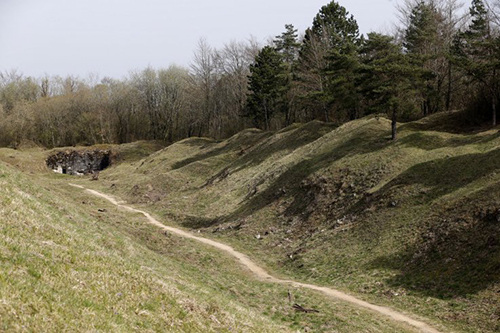 According to records at the CGC, it was not only soldiers graves that required digging and maintaining. In May 1918 nine QMAAC women were killed during  a German bombing run.  They were all given full military funerals, and on that day, fellow gardeners walked into the woods to collect wild daffodils to lay in the graves before their comrades were committed to the earth.  Again, I remember visiting one small cemetery and standing before the graves of doctors and nurses who had perished during intense shelling.

Those of you who have read my WW1 novel, THE CARE AND MANAGEMENT OF LIES, will remember the inspiration came from “The Women’s Book” published in 1911. You can read more about it here.  There’s a section in the book on women in horticulture and agriculture – it was considered a worthy occupation for a woman.  The role of tending a garden – particularly a garden where the dead of war are buried – seems to have been viewed as very much a feminine occupation. Perhaps there’s a sense of nurturing, of motherhood and sisterhood, and of giving those left to mourn a sense of a final farewell in safe womanly hands. 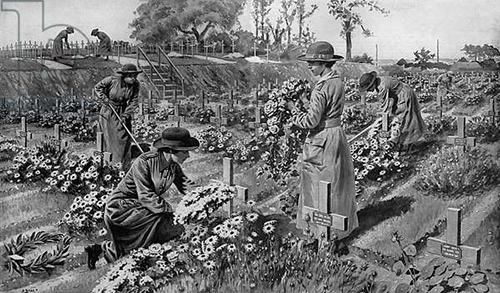 There was a great deal of interest in those women gardeners, with The Illustrated War News captioning “Women’s work for our war dead.”  The article focused on “the sympathetic and womanly work of caring for the resting place of our men.” 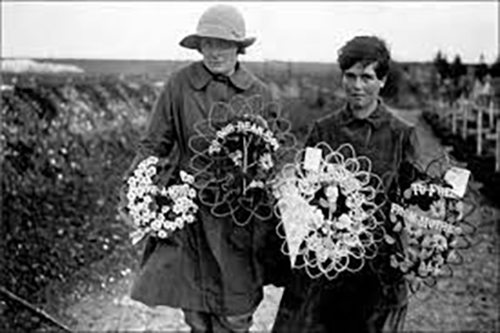 Post-war the interest remained, and according to an article published by the CGC in 2021, in March 1919, a woman, Olive Edis was sent by the Imperial War Museum to photograph British, French and American women attached to armed forces in post-war France – many photographs were of those British women tending graves. Writer Olivia Smith of CGC noted that Edis’ work “shows women in a position of responsibility and skill, unlike the images drawn for newspapers – we see the women in actual working conditions, rather than idealized carers.” 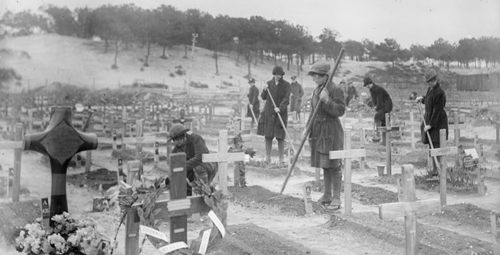 A photograph by Olive Edis

Although you see the images with rows of crosses, those were later replaced with the non-denominational markers allowing for a soldier’s personal religious affiliation to be engraved. Indeed the burying of the dead went on for many years. Often during battle the fallen were buried where they fell, with one person charged with recording the location so the remains could be retrieved for a more respectful burial later.  However, even today a farmer turning the soil will recover the remains of a fallen soldier from the Great War.

As an aside, during the occupation of Belgium during WW2, British military cemetery groundskeepers were allowed to remain as a mark of respect for the dead of WW1. Little did the Germans know that the groundskeeper at the Serre Road Cemetery was running an escape line for downed Allied pilots. 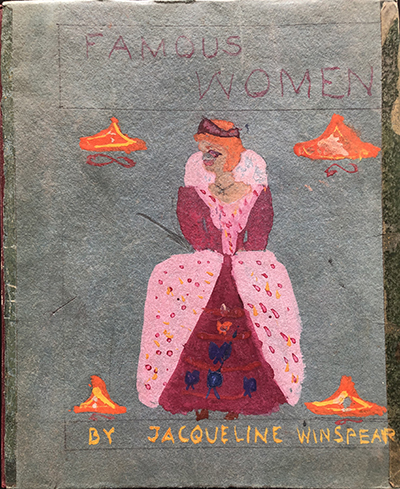